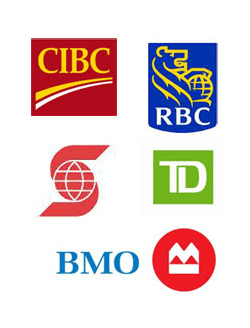 After yesterday’s move by the Bank of Canada to cut the overnight lending interest rate to 0.5 per cent various key mortgage providers have also lowered their rates. As anticipated they have not discounted their mortgage rates by the full 0.25% again, but some have discounted them more than last time.
The Toronto Dominion Bank was first to respond, just 12 minutes after the Bank of Canada’s announcement. It would appear they were ready for the rate drop and discounted their prime rate by 0.10%, like last time, to 2.75%. Other financial institutions, who clearly watched TD’s move, elected for a cut of 15 basis points (0.15 per cent). TD cut their prime rate again to match the other banks.
Scotiabank, RBC, CIBC, and BMO have all announced the rate cut to 2.70 per cent effective today. TD’s second rate cut will be behind the others for one day as the initial decrease takes effect today. The second cut comes in tomorrow (Friday 17th).

It is surprising that the banks have cut their rates by .015% this time, when they only cut them by .010% the last time the BoC made a .025% reduction. The banks have always claimed that mortgage rates depended more on the bond market, than the BoC’s overnight lending rate. Perhaps last time they decided to profit from the cut in rates.